View source
watch 01:36
We're Getting Mutants in the MCU - The Loop
Do you like this video?
Play Sound

Shelter is a place at where the character starts in a new game file. Character returns to the Shelter upon permadeath or passing through home portals. Major and permanent upgrades can be done in the Shelter, where items recycling, purchase and crafting are also available.

Installer locates in the leftmost chamber of the Shelter. Players can use emeralds to install modules on their characters in each run.

Players can step into the "capsule" in the middle chamber in Shelter to change their armors before journey or after returning to the Shelter using home portal. Changing armors cost 10 emeralds each time. While changing abilities cost 5 emeralds. Information like abilities and effects of armors unlocked is shown here.

This is also where every time a new character is created. Player can distribute Strength, Agility and Luck stats when creating character but cannot modify them when changing armors. 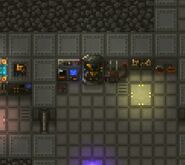 Factory locates in the middle chamber in the Shelter, next to the armor capsule. Players can use emeralds to make permanent improvements, e.g. upgrading bomb damage, unlocking new abilities.

The purple glowing portal located at the bottom part of the middle chamber of the Shelter can teleport character to the main places of adventure, caves, of :

Armory locates at the right chamber of the Shelter. Players can purchase unlocked weapons and ammo at Armory.

Blueprint of the items can be found in different caves.

Recycler 2.0 locates next to the Crafting Station in the shelter for recycling.

Crafting Station is where character can create items from different components through crafting.

Community content is available under CC-BY-SA unless otherwise noted.
Advertisement