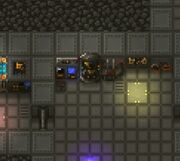 Blueprints are the source of most armor types, they are usually found behind cracked walls in the Ancient Ruins, but they can also be found at the Vending Machine and by Enemy Drop.

Retrieved from "https://caves-roguelike.fandom.com/wiki/Armors?oldid=639"
Community content is available under CC-BY-SA unless otherwise noted.